skip to main | skip to sidebar

Mostly I love google and it doesn't seem that compatible with my iPad. I just tried to insert a picture in a blog post and it refused. Perhaps I'm missing something it's quite possible.

Hair of the Dog

My boy showed me the following picture of a dog awhile ago and I LOVED it. I'm not sure why exactly, it's not as if I'm over the top in love with making animals look human nor with comb-overs, but there's something just awesome about this picture: 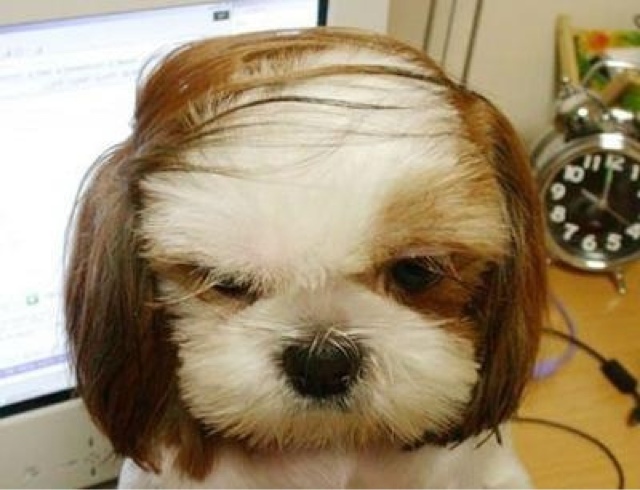 Sorry, I don't know the source, I copied it from my husband's face book and couldn't follow the link, I'm happy to put the source on there if someon comments with it.

Also, I mentioned that I'm on pinterest now and my dad commented on how he didn't know the point of pinterest but he saw some pictures of cute animals. Maybe that's the point.

According to a Japanes study I've clearly not read looking at cute animals can actually improve work productivity. This could prove very helpful at this point since I've worked overtime every day this week and I'm still not caught up. . . .

Anyway, I'm testing the blogger ap on my ipad, if it works well, I plan on telling you about my new obsession!

Um, I just wrote a post and everything but the title disappeared! I'm not saying it was great, but still I put in the effort!

Anyway, I was talking about how I'd missed  Candy Corn Oreo-Gate I just put gate on the end to make you go look ;).

I also missed a book written by a blogger I read. I just saw it in Hudson News at the airport and it's in paperback form and has "New York Times Best-Seller" plastered across the front, so when I say I missed that she wrote a book, I REALLY missed it. Also, you're going to click that link and be all, "um, how stupid is she?! There's a picture of the book in the sidebar!?!?" But I read it in google reader and It doesn't show that. I honestly missed whatever post mentioned the book.

I'm sure there's other things I'm missing, I just discovered the bloggess this summer and can't imagine how I lived without her before.

Anything else going on I should know about? And by anything else, you know I mean any other total frivolity?!

whew, done with day 5 of this blogging thing. We'll see how I do this weekend. I'm off to AZ for fall break with some college friends.

I made a cute itinerary and everything, I should have pdfed it so I could just post it here tomorrow :).
Posted by SRH at 2:37 PM No comments:

A Day Late and a Finger Short!

The Kitchn posted an article recently entitled: "How to Keep all your Fingers Intact During Root Vegetable Season." Sadly, it was too late for me. I sliced my thumb cutting an acorn squash on Sunday. It wasn't a bad slice (as in I didn't need stiches) but it did bleed through my first band aid.

My boy, former boyscout that he is, pulled out the gauze and first aid tape. He started to bandage my thumb but he wasn't making it tight enough.

Submissive, lovely woman that I am I started complaining: "It's not tight enough!! It's going to fall off!" My boy continued to work on the bandage (by which I mean my thumb was no longer in it and he was still trying to tape the bandage). I became more shrill, "Didn't you get a badge in first aid?!?! I think your badge should be REVOKED!!"

My boy calmly tried again as I still insisted it was not tight enough. "I don't understand how you got the badge! What did you practice on a dummy?!?!"

Yes, I'm counting this as my third day of posting in a row even if it's really only several hours after my last post (it's 12:30 where I am, even if the blog post lies).

Whenever I would have trouble falling asleep my dad would say that I should just relax, that looking at the clock and worrying about how late it was getting wasn't helping anything. Usually I'm pretty good about the relaxing thing (especially since Murder She Wrote is on netflix watch instantly now -- can we take a moment for another aside here so I can say how much I LOVE Murder She Wrote?!?!? My boy insists that is not a compliment that it takes me on average three times to get through one episode because it puts me to sleep so quickly, but clearly he's wrong!).

Anywho, recently I discovered this website: http://sleeptiming.com/ and while it purports to help you get refreshing sleep (and I'm sure it does for someone who uses it properly) it just makes me stress even more about how I'm not asleep and how I'm not going to ever get to sleep and most dishearteningly I AM NOT GOING TO GET REFRESHING SLEEP BECAUSE I"M NOT GETTING UP AT ANY OF THE RIGHT TIMES!!!!

Hope this post finds you refreshed in the morning, I'll be stumbling through making some coffee!
Posted by SRH at 9:32 PM No comments:

All's Fair in Love and Popcorn

Last weekend we went to the Big E. If you've been around this blog for any length of time you know how much we love the state fair here!

It felt a little crowded this year (apparently the peril of going on the middle weekend instead of the last weekend). While there were some disappointments and some scares (we did lose one of our party for awhile, luckily it was someone in their 30s and not one of the toddlers in our crew) overall it was another good year at the fair.

My favorite fair food is deep fried cheese curds. I walk the length of the fairgrounds as many times as I possibly can to get them --it's healthier for me that there's only one stand which sells them! I was lucky this year and got to score some cotton candy off the four year old we went with. That left only kettle corn on the list of must have fair foods. Every year our friend C buys the largest bags of kettle corn at one of the state houses. It's warm and lovely and no one can resist its charms (ok, my boy can, but he's really weird!!).

While nothing can beat the warm out of an actual kettle kettle corn at the fair. Joy the Baker has taught me how easy it is to make your own kettle corn. I'm sad because it looks like her original link is gone, but I think the one above should provide you with the recipe. It's a cheap treat (contrary to what you might think based on the prices at carnivals etc). So, if you're looking for a snack sure to impress, I recommend you make Joy the Baker's kettle corn! I sometimes like to add a little cayenne so there's a kick at the end!
Posted by SRH at 2:04 PM No comments:

A number of the bloggers I read are committing to writing every day in October on a specific topic. There are a lot of people joining this pledge. Most of the ones I read are writing on some aspect of home design but some of the bloggers (who aren't on my google feed) are writing about activities to do with children, books, excuses to get out of cleaning, jokes and more.

Since I've clearly been a terrible blogger lately (frankly, I don't know if any of you actually even read me anymore), I decided I'd just try to write for 31 days. Anything. Perhaps just one line. Just write.

As you may or may not know, this year has been a struggle for me, mostly the last three months, but overall, not a great year. Still, the year has managed to fly by. I can't believe it's October already!

My boy and I made the decision in January to talk about our life plans in December. As in are we staying here where we are, are we moving across the country to start some crazy new life, are we meeting somewhere in the middle between those two plans? So with that date fast approaching I'm getting nervous/excited. Perhaps I'll write more about that this month.

Or, perhaps I'll write more on elements of design. We bought a new rug for our bedroom, I'm angling for some new shelving and I've just joined pinterest. Not to mention, I've been obsessed with chesterfield sofas lately (not in the bedroom).

I'm also semi-obsessed with Cornwall ever since watching Doc Martin (who used to have a chesterfield sofa himself until the most recent season). My boy and I are tentatively planning a trip there in the spring to coincide with his 40th  birthday (CAN YOU BELIEVE I'M MARRIED TO A 40 YEAR OLD?!?!??!). Since he and my sister are a decade apart we might switch the destination to one she enjoys as well, we'll see.

Speaking of British obsessions, have you watched the new British show Sherlock?! So good. Also, all six episodes are currently on netflix watch it now. To continue my British/design stream of consciousness  you can go here to look at apartment therapy's take on the style of Sherlock: http://www.apartmenttherapy.com/get-this-look-bbcs-sherlock-177619

Okay, I think that's a good intro to the quality (or lack thereof) of posts you can expect from me for the next 30 or so days. Now don't you wish I'd taken my friend's suggestion and just started journaling at 750 words?

SRH
Boston, MA
A Seattilite at heart (despite moving from the city when I was less than a year old) I'm a woman whose entire life has culminated in finding the perfect job. Whether it was reading stories to younger children when I was in elementary school, my near crack addict level of book buying, or my obsession with self-inking stamps everything has led this shy, slightly OCD woman to be a librarian. I walk a thin line, being both extremely lazy and having impossibly high standards. Panic can ensue when my need for organization conflicts with my knack for procrastination. My cynical nature has led me to co-found, but not actually create, the exciting website bebitter.com. I have taken the lazy woman's way out and started a similarly named blog. . . . My passions include: family, friends and museums off the beaten path. I am a sucker for a good mockumentary and cannot live without google, diet coke,or netflix (in that particular order).

Blogs I know and love